This last week, Paul Rolly of the Salt Lake Tribune called me "refreshing" and a healthy "example of bipartisanship." Read the article below for all the details. I really appreciate all the expressions of support I have received in this regard. Sometimes we just have to work together and it shouldn't matter who gets the credit.

Here's a photo of, and the text from the article.  See original link here: http://www.sltrib.com/sltrib/politics/57529053-90/bill-sltrib-poulson-republican.html.csp 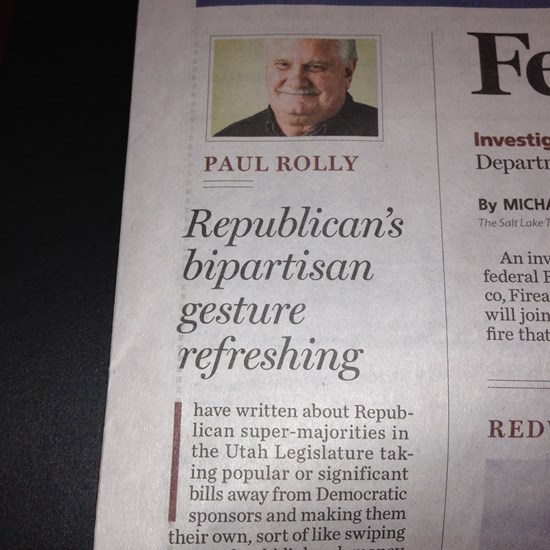 I have written about Republican super-majorities in the Utah Legislature taking popular or significant bills away from Democratic sponsors and making them their own, sort of like swiping the weaker kid’s lunch money.

The most egregious example came in the 1980s, when then-Democratic Rep. Grant Protzman spent a year on a comprehensive liquor-law overhaul, meeting with all the interested stakeholders.After his bill was introduced in the House, Republican leaders learned that his measure, after several refinements, had won the blessing of the LDS Church hierarchy.

The Republican-dominated Senate, not wanting a Democrat to get credit for a church-approved liquor bill, introduced its own version, identical to Protzman’s and sponsored by Senate President Arnold Christensen.  All the other GOP senators signed on as co-sponsors.

So what occurred early in the current legislative session was refreshing.  Rep. Marie Poulson, D-Cottonwood Heights, a former teacher, was passionate about addressing what she saw as a serious problem: the dissemination of intimate images of people without their permission.

Poulson viewed that as an invasion of privacy capable of destroying a person. So she developed HB71, making such dissemination a third-degree felony after vetting the so-called “revenge-porn” bill with numerous stakeholders.

At the same time, unbeknownst to Poulson, Rep. Craig Hall, R-West Valley City, had developed an almost identical bill, HB65, introducing it at first as a protected bill without divulging the contents.

When both measures became public, the Republican majority backed Hall’s bill, with Poulson’s getting the proverbial snub to which Utah Democrats have become so accustomed.

Hall, an attorney, was equally passionate about protecting the privacy of vulnerable people. But after the two lawmakers spoke, and Hall realized how important the bill was to his Democratic colleague, he agreed to scrap his measure and become a co-sponsor of Poulson’s legislation, with her remaining as the chief sponsor.

Hall represents District 33, a swing district. It was represented for years by a Democrat before he won the seat in 2012. Sponsoring a bill to protect privacy rights would be a nice issue for him to ride in his 2014 re-election bid. So his gesture to step aside is an example of bipartisanship that is healthy to see in a lawmaking body so dominated by one party.

Poulson’s bill has cleared the House Law Enforcement and Criminal Justice Committee and is now before the full House.